Today is our farewell to Peggy day and I wanted to say I will miss her one more time and add a picture of a place we had seen together.

One last time around the bend. 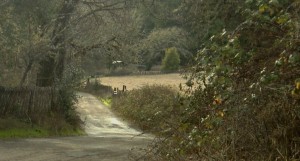 the world feels empty, every time someone leaves
so as one deals with it, this is called grieves

well known for her macaroni and cheese
Peggy made it so well, all who ate it where pleased

missing Peggy could be… but isn’t sad
for having known Peggy, I am so glad.