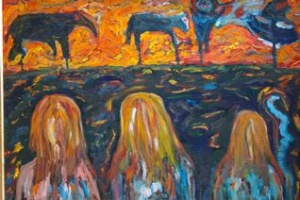 “Plato has Socrates describe a gathering of people who have lived chained to the wall of a cave all of their lives, facing a blank wall. The people watch shadows projected on the wall by things passing in front of a fire behind them, and begin to designate names to these shadows. The shadows are as close as the prisoners get to viewing reality. He then explains how the philosopher is like a prisoner who is freed from the cave and comes to understand that the shadows on the wall do not make up reality at all, as he can perceive the true form of reality rather than the mere shadows seen by the prisoners.”
“Allegory of the cave” from Wikipedia”.

Now I did not read all of the synopsis written from Wikipedia…I recall the person who was freed (escaped in my version) from the cave returns and tells the others about… real reality and they do not believe him and end his life, which seems hard to fathom when they where chained up? I sort of look at Plato’s Cave as our Mass Media… especially biased news, always calling wolf.

Anyway I painted Plato’s Cave from me minds eye and it is oil on panel, if I recall I used a pallet knife and mixed all my colors from the basic color wheel back when I was determined to mix my own colors.

The analogy of Platos Cave came to mind recently when I saw this on UTube, a poem called the Matrix. I find it cogent: